If we’re not building a story, or a community, or even a list is there a point? 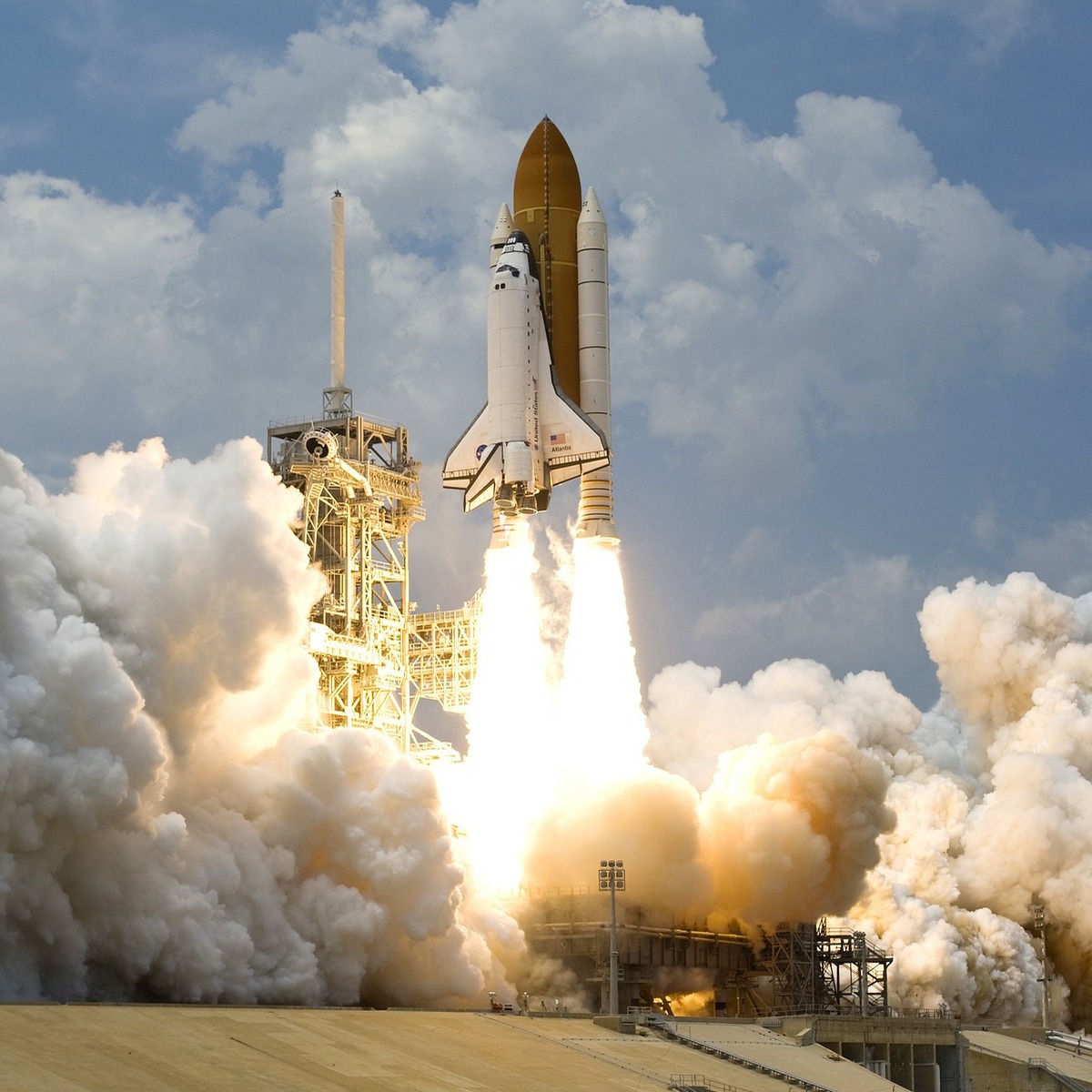 An Emmy is marketing. Any award is.

For example, winning an Oscars boasts an increase in box office receipts, to the tune of about 14 million dollars (look up the “Oscar bump). When “Mad Men” was nominated for 16 Emmys its first season the audience doubled. Netflix gets a nice little jump in its stock for Emmy wins, and the stock in actors goes up as well.

Here’s what happened and what I’ve learned from working social and marketing at NASA and Television Academy:

As our group of space nerds walked down the aisle to the stage it seemed that everyone in the crowd had this question etched upon their makeup heavy televised faces. I noticed a slight pause or tensing of muscles and tendons in arms and hands as the live audience measured levels of rapport and length of their applause. NASA didn’t have any creatives doused in sequined tuxedos or industry execs decked out in gowns with bird heads jutting oddly out of the side. We were the Bad News Bears of the night, a group of science communicators and makers of spacecraft that were making a journey to a stage we’d never imagined we’d ever grace. Our shared unspoken goal was to not trip.

On the Red Carpet, we had already been shunned by most of the major news outlets as we gawked and selfied our way through past familiar faces of stage and screen. Outlets like Vanity Fair and Entertainment Weekly couldn’t decide if we were a sideshow… or worse, a side note to the Hollywood conversation they’d been telling for decades. My pitch to get interviews had gotten better as we made it deeper into the event. I told the reporters that we were going to win. I assured hosts that this would be historic and that it would be one of the most important conversations in the news cycle the following day. I got a few yeses and watched proudly as our brilliant scientists informed an audience about our missions to Saturn and Mars and how we formed the stories that brought a global audience along. 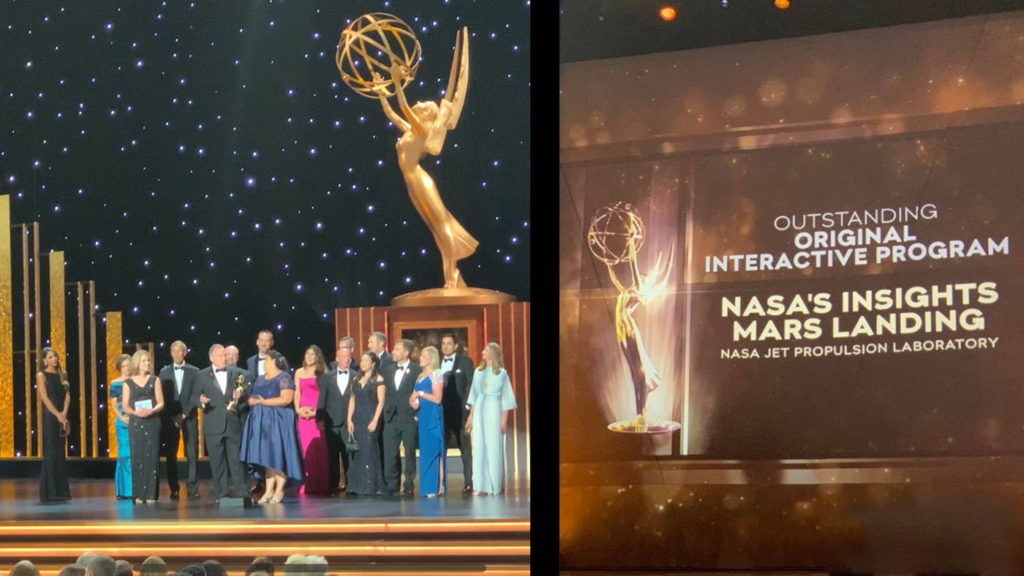 The truth is, NASA is filled with brilliant storytellers. After all, a place filled with spaceships tends to be breeding ground for amazing content.

This became the conversation that filled magazines and newspapers that night and the following week. The deer-in-headlights pictures of our team from our first win in 2018 were replaced in by pictures that looked like a teenager’s awkward first prom for our two wins in 2019.

“What are you wearing?” someone asked me as I stared at one of my favorite actors from Stranger Things.

She lowered her camera and walked in the opposite direction. I’d forgotten the brand and knew that I’d probably not make whatever weekly publication the young lady worked for. As she disappeared into the crowd I presumed that my mustache must have made me look important. One can never know.

While my fashion choices might not be tres magnifique, NASA’s ability to win Emmys and share amazing stories is. Now that I have painted a picture of our Emmy experiences, let’s get into how we got were able to win three Emmys in two years with categories in New Media. We won for three different missions but I’m only going to share my favorite with you because I’m passionate about this mission and passion always helps to tell a story.

Attention is important and I want to respect the amount that you, my dear reader, might have at your disposal.

In 2018 NASA won its first Emmy for Outstanding Original Interactive Programming. The broadcast was on the Cassini’s EOM… but I have to remember that not everyone speaks in NASA acronyms. Cassini was a spacecraft whose EOM (End of Mission) changed towards the because during her travels she found the potential for life on Titan, Saturn’s largest moon. Cassini was running out of fuel after a mission that had lasted for around two decades and NASA couldn’t risk contaminating a world that could support life. The plan was to go… like super hard (#laymansterms) with a series of dives between Saturn and its rings followed by a ‘Grand Finale’ where we aimed the spacecraft directly at the gas giant, effectively melting into the atmosphere at an unfathomable 68,000 mph.

This Grand Finale was broadcasted live on multiple platforms while the story connected audiences to social media. There was a live 360 video from mission control, curricula were shared widely with educators, influencers were brought to on-site events, and there was a laundry list of other ways to connect an audience to an amazing mission. After all, as your space agency, NASA’s mission is to disperse space awesomeness to the largest audience possible.

If the Academy of Arts and Sciences was organized in the same way fifty years ago as it is today NASA would have won an Emmy for Outstanding Original Interactive Programming for live streaming from the Moon.

A friend recently told me that I shouldn’t use this term. Content strategy is storytelling. My mind fired on all cylinders about technology, social listening, CRMs and all of the other components that go into a major marketing campaign. I realized that she was correct and I closed my mouth. It was an argument that she had already won.

Life happens in Real-Time. Life happens in 360. It is experiential and immersive. Breathing life into digital is a thing of brilliance. Whether it is a TikTok story or a complex web experience using volumetric capture and full-room lidar scan the story isn’t anything unless the storyteller understands how it is conveyed on that channel, in that book, on that screen, in that headset, or at that event.

As a marketing expert, it is my job to understand all of these lenses, manipulate the platforms, and innovate the telling of the story. For Cassini, we were in constant contact with science writers, engineers, and scientists. It was an evolving conversation about how to make the public aware of a spacecraft whose legacy predated social media, make them care about the scientific discoveries, and, most importantly, to make our audience have ownership and feel part of the mission that they helped to fund.

Story is a constant flowing thing. A good story is parallel to the readers life from its highs and lows to its birth and, finally, to its death. The story that we told for Cassini was, in reality, her obituary. There are some deaths that we know are coming. Some deaths are too early. Some deaths are a surprise. If Cassini was fully anthropomorphized it would have been a guns blazing, front of the line charging into war type of death of an action hero.

Every campaign that I have worked on that has worked has had this component. After all, it’s the only thing that we want.

Love and marketing (maybe I’ll use this as the title for my next book). I feel extremely hippy as I write this, but love is the binding agent for story and community. If you’re not finding the love portion of your brand then you’re looking in the wrong places. Can you imagine NASA only telling stories of hardware and space? The truth is that NASA spacecraft not only have a name but a personality and both of these are developed with community (and love). Children K-12 submit essays to name these missions and then thousands of volunteers all over the country judge these essays.

Seriously, take a look at your content. Scroll through your Twitter, Facebook and Instagram feeds and have a look. Do these stories bring your viewers into a long conversation? Is there something relatable in there to an audience you want? Are you inspiring something? Are you leaving enough for them to want more? NASA’s bigger missions are often named by schoolchildren. The ‘Name The Rover’ campaigns get submissions from kids K-12 and give this special ownership to the kids, parents, schools, and communities. NASA even opens up a website for volunteer judges to view and vote on the entries.

For the first year after Cassin’s Emmy win, I couldn’t help but get choked up as I talked about the mission. During panel discussions or keynotes I would struggle to keep my composure. Sometimes I would have a short video ready during presentations so that I could keep from outright crying. There’s magic in strategic storytelling and that mentality is more important to instill than any CRM or SEO advice I could ever give. My brilliant mentor at NASA’s Jet Propulsion Laboratory, Veronica McGregor, set up a 360 camera in Mission Control to put people in the middle of the action. With an innovative picture-in-picture setup, our audience was able to be in VR or scan around on YouTube and be there as the spacecraft sent back her final communications. Her vision of bringing millions of people into that very special place transcended the technology when Earl Maize, Cassini Program Manager, called End Of Mission and tearfully thanked his team.

You don’t think about VR when you’re totally in the moment just like you don’t think about the book when you can see every character in your mind. But, just like any author works for years to write and edit the books that we read in a few days, these unforgettable moments require characters, setting, plot, conflict, and resolution. Since Cassini’s Grand Finale there have been Netflix specials and hundreds of articles and interviews. Heck, Earl Maize was even named one of Fast Company’s 100 Most Creative People. But we have to look at how long it took to build the backbone that can hold all of it up.

Virality is less of a myth than it is a plan. Yes, there’s some one-off lottery winner occasionally when you see some random human getting massive mbers but the reality is that most viral content comes from companies and influencers that have had things go viral before. After all, every one of these influencers, companies, and marketer knows that there are ways to game the system, work the hashtags, pick the thumbnails, hack a little growth, buy ads, time things out, listen to the pulse, etc. but they’ve already developed the community to seed that content.

The best plan is to define what is viral for you. If you manage platforms that are getting hundreds of impressions then you should look at the metrics and makeup of the posts that get you a few thousands of impressions. Take time to vet why it happened and see if it had the intended sales or signups that you wanted. Know that you’re going to build on this.

After all creating something that has a major, or event a lasting impression is a form of art. Heck, how ephemeral do we want our content to be? It seems as though we’ve accepted that a story lasts less than 24 hours. Why do we think that vanity metrics are worth our marketing budget?

If we’re not building a story, or a community, or even a list is there a point?